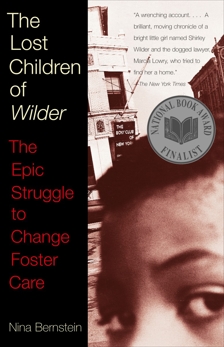 The Lost Children of Wilder: The Epic Struggle to Change Foster Care

Synopsis: In 1973 Marcia Lowry, a young civil liberties attorney, filed a controversial class-action suit that would come to be known as Wilder, which challenged New York City’s operation of its foster-care system. Lowry’s contention was that the system failed the children it was meant to help because it placed them according to creed and convenience, not according to need. The plaintiff was thirteen-year-old Shirley Wilder, an abused runaway whose childhood had been shaped by the system’s inequities. Within a year Shirley would give birth to a son and relinquish him to the same failing system.

Seventeen years later, with Wilder still controversial and still in court, Nina Bernstein tried to find out what had happened to Shirley and her baby. She was told by child-welfare officials that Shirley had disappeared and that her son was one of thousands of anonymous children whose circumstances are concealed by the veil of confidentiality that hides foster care from public scrutiny. But Bernstein persevered.

The Lost Children of Wilder gives us, in galvanizing and compulsively readable detail, the full history of a case that reveals the racial, religious, and political fault lines in our child-welfare system, and lays bare the fundamental contradiction at the heart of our well-intended efforts to sever the destiny of needy children from the fate of their parents. Bernstein takes us behind the scenes of far-reaching legal and legislative battles, at the same time as she traces, in heartbreaking counterpoint, the consequences as they are played out in the life of Shirley’s son, Lamont. His terrifying journey through the system has produced a man with deep emotional wounds, a stifled yearning for family, and a son growing up in the system’s shadow.

In recounting the failure of the promise of benevolence, The Lost Children of Wilder makes clear how welfare reform can also damage its
intended beneficiaries. A landmark achievement of investigative reporting and a tour de force of social observation, this book will haunt every reader who cares about the needs of children.