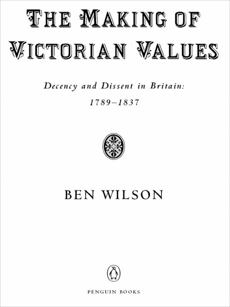 The Making of Victorian Values: Decency and Dissent in Britain: 1789-1837

Synopsis: Ben Wilson's The Making of Victorian Values is the history of an era rather like our own-a time when dissenters and rebels were hemmed in by conformists and hardheaded authoritarians, a time when a nation on the eve of global domination fretted about its future. It was, however, a period when those who argued that a British empire would be a disaster for liberty were eventually squashed by imperialists, just as those who railed against mindless materialism were in the end rolled over by industrialists and the promoters of luxury goods. The Making of Victorian Values reveals an era when people were obsessed with the need to appear authentic, and yet forever had doubts about who was and who wasn't-concerns familiar to the "me" age we know so well.

Wilson begins with the libertine spirit inspired by Byron, Shelley, and the Romantics; he ends with the rise and eventual victory of stolid middle-class values. The result is a radical tour de force, a brilliant reworking of the pre-Victorian age. Once portrayed by Paul Johnson in his bestselling The Birth of the Modern as the years when virtue finally trumped corruption, Wilson reveals a far more compelling story-and a more engrossing and scandalous one, too. It is a story about hypochondriacs and cranks, killjoys and dandies, rakes and priests, advocates of free-speech and those against it-people who were made awe struck by Britain's emerging role as the economic and political powerhouse of the world, but who were also deeply anxious about the responsibilities a vast empire might require.

Wilson is heir to the great radical historians of the twentieth century, E. J. Hobsbawm and E. P. Thompson, among them. He brushes aside scholarly politesse and refuses to join in unnecessary academic point-settling, and his invigorating literary abilities will win many admirers who would otherwise know this history only through the works of nineteenth-century fiction.