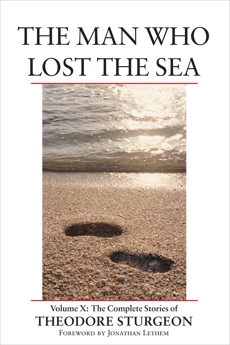 The Man Who Lost the Sea: Volume X: The Complete Stories of Theodore Sturgeon

Synopsis: By the winner of the Hugo, the Nebula, and the World Fantasy Life Achievement Awards, this latest volume finds Theodore Sturgeon in fine form as he gains recognition for the first time as a literary short story writer. Written between 1957 and 1960, when Sturgeon and his family lived in both America and Grenada, finally settling in Woodstock, New York, these stories reflect his increasing preference for psychology over ray guns. Stories such as "The Man Who Told Lies," "A Touch of Strange," and "It Opens the Sky" show influences as diverse as William Faulkner and John Dos Passos. Always in touch with the zeitgeist, Sturgeon takes on the Russian Sputnik launches of 1957 with "The Man Who Lost the Sea," switching the scene to Mars and injecting his trademark mordancy and vivid wordplay into the proceedings. These mature stories also don't stint on the scares, as "The Graveyard Reader"—one of Boris Karloff's favorite stories—shows. Acclaimed novelist Jonathan Lethem's foreword neatly summarizes Sturgeon's considerable achievement here.