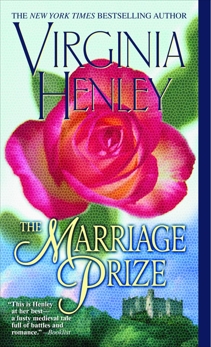 Synopsis: Few writers can rival the sheer storytelling mastery of New York Times bestselling author Virginia Henley. Brimming with sensual tension, humor, and narrative power, Henley's award-winning novels have enchanted readers worldwide. Now in The Marriage Prize-the third novel in her Plantagenet trilogy, which began with The Falcon and the Flower and continued in The Dragon and the Jewel-this incomparable storyteller returns to medieval England and brings to life a love story so passionate it will take your breath away.

Orphaned at a young age, Rosamond Marshal is a royal ward of Eleanor de Montfort, sister of King Henry III and wife of the renowned warlord Simon de Montfort. Under the worldly countess's tutelage, Rosamond learns not only the skills of a chatelaine, but how to wield her female power by dressing exquisitely, conversing wittily, and charming men mercilessly. As she reaches young womanhood, the beautiful heiress is fearful of leaving the security of the de Montfort household and fulfilling her betrothal to the powerful bachelor knight Rodger de Leyburn. Just as Rodger devilishly outmaneuvers Rosamond's strategems to break their betrothal, Prince Edward will accept none of Rosamond's excuses to forestall her marriage. For the prince is determined to reward Rodger, his dearest friend, with a wealthy, noble wife.

Slowly Rodger woos Rosamond, convincing her that his love extends beyond her estates and her wealth. But no sooner does Rosamond become Rodger's wife and experience all the exquisite ways a man can love a woman than she finds herself and her husband on opposite sides of a bloody civil war. For Rodger is fighting alongside Prince Edward and the king to quell the barons' rebellion, led by none other than Rosamond's beloved guardian, Simon de Montfort.

With the gripping storytelling, vibrant historical detail, and powerful insight into a woman's heart that have made her one of the most popular authors of romantic fiction, Virginia Henley sweeps readers into the most captivating and wildly passionate love story of her career.