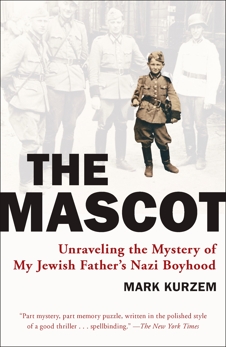 The Mascot: Unraveling the Mystery of My Jewish Father's Nazi Boyhood

Synopsis: The "spellbinding" (The New York Times) true story of a Jewish boy who became the darling of the Nazis

When a Nazi death squad massacred his mother and fellow villagers, five-year-old Alex Kurzem escaped, hiding in the freezing Russian forest until he was picked up by a group of Latvian SS soldiers. Alex was able to hide his Jewish identity and win over the soldiers, becoming their mascot and an honorary "corporal" in the SS with his own uniform. But what began as a desperate bid for survival became a performance that delighted the highest ranks of the Nazi elite. And so a young Jewish boy ended up starring in a Nazi propaganda film.

After sixty-three years of silence, Alex revealed his terrible secret to his son Mark. With his son's help, Alex retraced his past in search of answers and vindication. His story is at once a terrifying account of survival and its psychological cost as well as a brutally honest examination of identity, complicity, and memory.