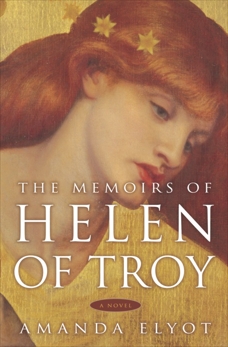 The Memoirs of Helen of Troy: A Novel

Synopsis: In this lush, compelling novel of passion and loss, Helen of Troy, a true survivor, tells the truth about her life, her lovers, and the Trojan War. This is the memoir that she has written—her legendary beauty still undimmed by age.

Gossips began whispering about Princess Helen from the moment of her birth. A daughter of the royal house of Sparta, she was not truly the progeny of King Tyndareus, they murmured, but of Zeus, king of the gods. Her mother, Queen Leda, a powerful priestess, was branded an adulteress, with tragic consequences. To complicate matters, as Helen grew to adulthood her beauty was so breathtaking that it overshadowed even that of her jealous sister, Clytemnestra, making her even more of an outcast within her own family. So it came as something of a relief to her when she was kidnapped by Theseus, king of Athens, in a gambit to replenish his kingdom’s coffers.

But Helen fell in love with the much older Theseus, and to his surprise, he found himself enamored of her as well. On her forced return to Sparta, Helen was hastily married off to the tepid Menelaus for the sake of an advantageous political alliance. Yet even after years of marriage, the spirited, passionate Helen never became the docile wife King Menelaus desired, and when she fell in love with another man—Paris Alexandros, the prodigal son of King Priam of Troy—Helen unwittingly set the stage for the ultimate conflict: a war that would destroy nearly all she held dear.

I learned that I was different when I was a very small girl: when the golden curls, which barely reached my shoulders at the time, began to turn the color of burnished vermeil. Your grandmother Leda, whom you never knew, told me that I was a child of Zeus. Since I thought my father’s name was Tyndareus, her words upset me. Seeing my pink cheeks marred by tears of confusion, my mother handed me a mirror of polished bronze and asked me to study my reflection.

I nodded, noting in my own skin the exquisite fairness of her complexion, and her hair the same shade as mine that tumbled like flowing honey past the hollow of her back.

“And do you resemble my husband Tyndareus?” she said to me.

I looked in the mirror and then looked again. For several minutes I remember expecting the mirror to show me my father’s face, but Tyndareus was olive complected where I was not, his nose like the beak of a falcon where my own was straight and fine-boned, and his cheekbones were hollow and slack where, even then, beneath a child’s rosy plumpness, mine were high and prominent.

—From The Memoirs of Helen of Troy