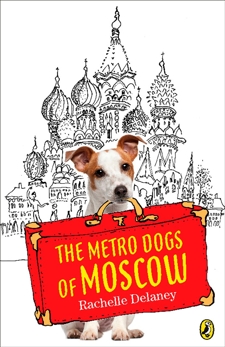 The Metro Dogs of Moscow

Synopsis: JR (short for Jack Russell) is an embassy dog. His human, George, is a diplomat who has to travel for work. A lot. Now George is working at the Canadian Embassy in Moscow. And while he fancies himself an adventurous globetrotter, he doesn't see why JR needs any more excitement than hanging out at the park with the other embassy dogs.

JR, however, has had quite enough of leashes and perfectly manicured parks—not to mention the boring embassy dogs. He decides to explore Moscow himself, and soon meets some wily Russian strays. JR is convinced that this is the life he’s been looking for. Amazing city smells! Mouthwatering stuffed potatoes! And best of all, the freedom to travel on the Moscow metro!

Meanwhile, George has found himself a new girlfriend: the ravishingly beautiful Katerina, who JR suspects is too good to be true. And if that weren’t trouble enough, JR's new friends are starting to mysteriously disappear.

When an embassy dog goes missing as well, JR knows he must use everything he’s learned about his new home to solve the mystery of Moscow’s missing dogs.