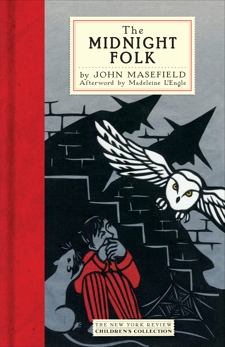 Synopsis: The Midnight Folk introduces readers to Kay Harker, the orphaned boy who is also the hero of John Masefield’s classic Christmas fantasy, The Box of Delights. Kay lives in a vast old country house, and is looked after by an unpleasant duo: the oily and egregious Sir Theopompous and the petulant and punitive Sylvia Daisy Pouncer. In her zeal to educate Kay on the finer points of Latin grammar, Sylvia Daisy has even taken away all of Kay’s toys. Life seems very dull, until out of an old family portrait steps Kay’s great-grandfather, a sea captain, who, if legend is to be believed, made off with a fabulous treasure.

Soon Kay is engaged in a thrilling quest that begins each night as the clock strikes twelve, taking him into the enchanted and dangerous world of the Midnight Folk: pirates, highwaymen, talking animals, and a gang of witches led by none other than Sylvia Daisy (in cahoots, as in The Box of Delights, with the arch-villain Abner Brown). In the end, it is that ragtag team of old toys that rallies to support Kay and save the day.

A book to set beside C.S. Lewis’s Narnia tales and Joan Aiken’s Wolves of Willoughby Chase—not to mention the Harry Potter series—The Midnight Folk is a wonderful and enthralling contribution to the great English tradition of children’s literature, beloved by adults and children alike.