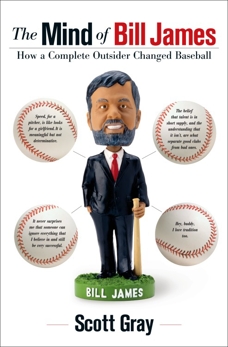 The Mind of Bill James: How a Complete Outsider Changed Baseball

Synopsis: The first book to chronicle the life and ideas of “the serious baseball fan’s high priest” (New York Times), the impact of his brilliant and entertaining writings, and how someone who never pitched a ball, held a bat, or managed a team fundamentally changed the way baseball is interpreted, analyzed, and even played.

Bill James has been called “baseball’s shrewdest analyst” (Slate) and “part of baseball legend” (The New Yorker), and his Baseball Abstract has been acclaimed as the “holy book of baseball” (Chicago Tribune). Thirty years ago, James introduced a new approach to evaluating players and strategies, and now his theories have become indispensable tools for agents, statistics analysts, maverick general managers, and anyone who is serious about understanding the game.

James began writing about baseball while working at a factory in his native Kansas. In lively, often acerbic prose, he used statistics to challenge entrenched beliefs and uncover surprising truths about the game. His annual Baseball Abstract captured the attention of fans and front offices and went on to become a bestselling staple of the baseball book category. In 2002, the Boston Red Sox hired James as an advisor. Two years later they achieved their long-awaited World Series triumph.

The Mind of Bill James tells the story of how a gifted outsider inspired a new understanding of baseball. It delves deeply into James’s essential wisdom–including his surprising beliefs about pitch counts and the importance of batting-order, thoughts on professionalism and psychology, and why teams tend to develop the characteristics that are least favored by their home parks. It also brings together his best writing, much of it long out of print, as well as insights from new interviews. Written with James’ full cooperation, it is at once an eye-opening portrait of baseball’s virtuoso analyst and a treasury of his idiosyncratic genius.