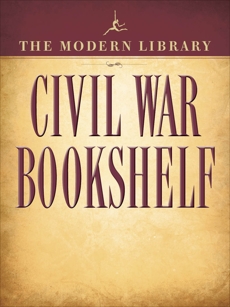 Synopsis: Like no other event in our history, the Civil War divided the nation, redrew our notions of freedom and citizenship, and provided the backdrop for some of the most enduring works in the American literary canon. This Modern Library eBook bundle collects five titles that illuminate that transformative conflict: Personal Memoirs of Ulysses S. Grant, the classic novels Uncle Tom’s Cabin and The Red Badge of Courage, The Essential Writings of Jefferson Davis, and The Life and Writings of Abraham Lincoln.

The memoirs of the legendary Union general chart the fortunes that shaped his life and character—from his frontier boyhood to his heroics in battle to the grinding poverty from which the Civil War “rescued” him. Among autobiographies of great military figures, Grant’s is considered one of the finest.

Abraham Lincoln called Uncle Tom’s Cabin “the book that made this great war.” Langston Hughes called it “a moral battle cry.” Harriet Beecher Stowe’s classic novel offers a shockingly realistic depiction of slavery and a portrait of human dignity in the most inhumane circumstances.

THE RED BADGE OF COURAGE

One of the greatest works of American literature, The Red Badge of Courage gazes fearlessly into the bright hell of war through the eyes of one young soldier, the reluctant Henry Fleming. Stephen Crane’s novel imagines the Civil War’s terror and loss with an unblinking vision so modern and revolutionary that critics hailed it as a work of literary genius.

The Confederate president is one of the most complex and controversial figures in American political history. Editor William J. Cooper combs through the authoritative Papers of Jefferson Davis for this selection of letters, major speeches, and public and private writings. Collectively, they present a multifaceted portrait of a man who continues to fascinate scholars and Civil War buffs alike.

THE LIFE AND WRITINGS OF ABRAHAM LINCOLN

The greatest of all American presidents left us a vast legacy of writings, some of which are among the most famous in our history. From the plainspoken eloquence of the Gettysburg Address to the soaring rhetoric of his Second Inaugural, this marvelous volume serves as a guide to Lincoln’s life through his speeches, letters, and public remarks.