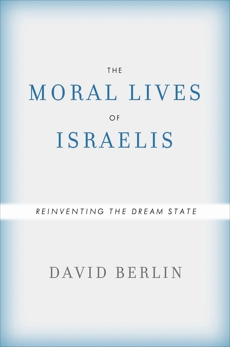 The Moral Lives of Israelis: Reinventing the Dream State

Synopsis: Brave, intensely personal and politically incisive — an essential and thought-provoking look at the state of Israel today from an Israeli-Canadian's perspective.

The Moral Lives of Israelis explores the last ten years of life in Israel, a sixty-one-year-old country that has never not been in a state of war. It began in David Berlin's head as he sat vigil over his father's deathbed in a falling-down hospital in Tel Aviv. The last words given to him by his father were not words of love for his son and his grandchildren, but this command: "Look after my little country." That note set off a huge voyage of exploration and remembrance for Berlin, who has spent much of the last six years living and reporting in Israel, interviewing his own generation and the new crop of politicians and leaders, and witnessing the Second Lebanon War, the removal of the settlers from Gaza, and other defining events.

The result is a thrilling blend of memoir, reportage and original thinking on the place of Israel in the world. The fundamental question that floats over every page of this passionate book is, with so many missteps and in a region deeply fraught with antagonism, racism and misunderstanding, how can Israel move forward? After many dead ends and twists and turns, it is the nineteenth-century visionary father of Zionism, Theodor Herzl, who ultimately sparks Berlin's dream for Israel in the twenty-first century — it is Herzl's insistence on a secular and cosmopolitan state that Berlin sees as a way to move beyond.

Berlin's brave inquiry will be a must-read for anyone concerned with the fate of the Middle East — it engages on every level from the deeply emotional to the philosophical, and brings new perspective to a question that resonates well beyond the borders of Israel.