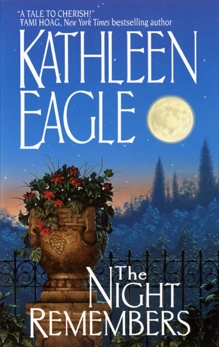 Synopsis: In a spellbinding novel of depth and sensitivity, award-winning author Kathleen Eagle masterfully weaves the richness of Native American folklore into a contemporary story of hope, courage, and the power of love to lift the human spirit.

Angela Prescott has pulled up stakes and moved halfway across the country, seeking refuge from a man who has made her life a nightmare. Starting over in an unfamiliar city, she's wary and keeps to herself, until she meets twelve-year-old Tommy T.

Street-smart Tommy T knows how to keep secrets. He's told no one of the mysterious recluse living in an underground hideaway, whose face he's never seen. A gifted comic book artist with no place to live, Tommy T needs someone to believe in, and in this phantom stranger he finds the comic book superhero of his dreams.

Jesse Brown Wolf's past has driven him underground in many ways. By day, he is a handsome repairman who fixes the plumbing in Angela's rooms. By night he lives in the shadows, acting with reckless bravery to make the streets safer for kids. . .and whispering into Angela's sleeping ear promises of comfort, security, and heart's ease.