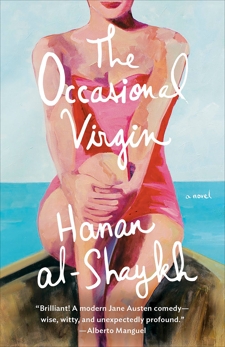 The Occasional Virgin: A Novel

Synopsis: On a sunny beach on the Italian Riviera, two thirtysomething women, Yvonne and Huda, relax by the sparkling sea. But despite the setting, as their vacation unfolds, their complicated pasts seep through to the idyllic present. Both women spent their childhoods in Lebanon—Yvonne raised in a Christian family, Huda in a Muslim one—and they now find themselves torn between the traditional worlds they were born into and the successful professional identities they’ve created.

Three months later, when Huda (a theater director from Toronto) visits Yvonne (an advertising executive) in London, a chance encounter with a man at Speaker’s Corner leads to profound repercussions for them both, as each woman undertakes her own quest for romance, revenge, and fulfillment.

Witty and wry, The Occasional Virgin is a poignant and perceptive story of the tumultuous lives and sometimes shocking choices of two women successful in their careers but unlucky in love.