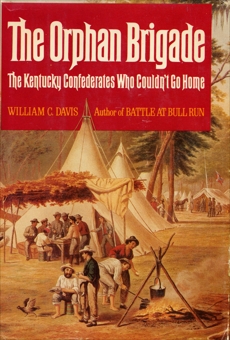 The Orphan Brigade: The Kentucky Confederates Who Couldn't Go Home

Synopsis: On September 18, 1861, ominous sounds of battle thundering in the distance, the Kentucky legislature voted to align itself with the Union. It was a decision which tore at the heart of the state, splitting apart families and severing friendships. For the newly formed First Kentucky Brigade, it marked a four-year separation from the beloved homeland. Fiercely independent to the end, these men would fight for the cause of the South. With their first march into battle, they became outcasts from their mother state — orphans in the raging strife of civil war.

William C. Davis has written a gripping story of the rebel troops whose remarkable spirit and tenacity were heralded throughout the Confederacy. The First Kentucky Brigade was “baptized in fire and blood” at the Battle of Shiloh and went on to serve with great distinction at Vicksburg, Baton Rouge, Chickamauga, and the fight for Atlanta. In this vivid narrative, the author captures the searing drama of each battle, as well as the unbearable drudgery of the months between. We see men of all backgrounds and ranks coming to grips with the war: some of them, renowned leaders such as John C. Breckinridge; others, young soldiers learning the horror of death for the first time. Drawing from a wealth of documents, memoirs, personal letters, and journals, Davis brings to life the fascinating history of the Civil War’s “Orphan Brigade.”