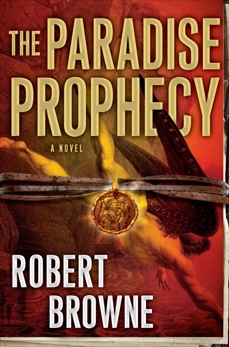 Synopsis: Prepare yourself for the paradise prophecy. Then pray it isn’t happening.

An iconic, near saintly, pop singer dies suddenly, tragically in an inexplicable fire. She’s only the first victim in a series of similar, unspeakable deaths.

Bernadette Callahan is an investigator at a shadowy government organization. She’s on the trail of a serial killer with ungodly means of disposal.
Religious historian Sebastian LaLaurie knows that the crimes are more than the work of a psychopath, and that Bernadette is closing in on something she never bargained for.

Now Sebastian must convince Bernadette to believe—in the power of fallen angels in disguise. In the ancient clues of the Bible. In the hellfire of a coming apocalypse. In the prophecies of Paradise Lost. And ultimately, in the unholy conspiracy upon them, one far beyond the scope of mankind’s darkest imagination. And one that no human can stop.