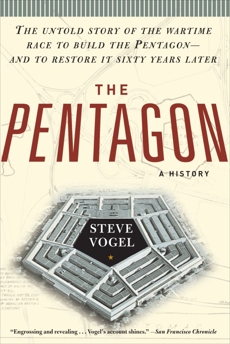 The Pentagon: A History

The creation of the Pentagon in seventeen whirlwind months during World War II is one of the great construction feats in American history, involving a tremendous mobilization of manpower, resources, and minds. In astonishingly short order, Brigadier General Brehon B. Somervell conceived and built an institution that ranks with the White House, the Vatican, and a handful of other structures as symbols recognized around the world. Now veteran military reporter Steve Vogel reveals for the first time the remarkable story of the Pentagon’s construction, from it’s dramatic birth to its rebuilding after the September 11 attack.

At the center of the story is the tempestuous but courtly Somervell–“dynamite in a Tiffany box,” as he was once described. In July 1941, the Army construction chief sprang the idea of building a single, huge headquarters that could house the entire War Department, then scattered in seventeen buildings around Washington. Somervell ordered drawings produced in one weekend and, despite a firestorm of opposition, broke ground two months later, vowing that the building would be finished in little more than a year. Thousands of workers descended on the site, a raffish Virginia neighborhood known as Hell’s Bottom, while an army of draftsmen churned out designs barely one step ahead of their execution. Seven months later the first Pentagon employees skirted seas of mud to move into the building and went to work even as construction roared around them. The colossal Army headquarters helped recast Washington from a sleepy southern town into the bustling center of a reluctant empire.

Vivid portraits are drawn of other key figures in the drama, among them Franklin D. Roosevelt, the president who fancied himself an architect; Secretary of War Henry L. Stimson and Army Chief of Staff General George C. Marshall, both desperate for a home for the War Department as the country prepared for battle; Colonel Leslie R. Groves, the ruthless force of nature who oversaw the Pentagon’s construction (as well as the Manhattan Project to create an atomic bomb); and John McShain, the charming and dapper builder who used his relationship with FDR to help land himself the contract for the biggest office building in the world.

The Pentagon’s post-World War II history is told through its critical moments, including the troubled birth of the Department of Defense during the Cold War, the tense days of the Cuban Missile Crisis, and the tumultuous 1967 protest against the Vietnam War. The pivotal attack on September 11 is related with chilling new detail, as is the race to rebuild the damaged Pentagon, a restoration that echoed the spirit of its creation.

This study of a single enigmatic building tells a broader story of modern American history, from the eve of World War II to the new wars of the twenty-first century. Steve Vogel has crafted a dazzling work of military social history that merits comparison with the best works of David Halberstam or David McCullough. Like its namesake, The Pentagon is a true landmark.