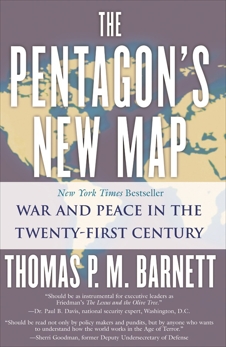 The Pentagon's New Map: War and Peace in the Twenty-First Century

Synopsis: Since the end of the Cold War, America's national security establishment has been searching for a new operating theory to explain how this seemingly "chaotic" world actually works. Gone is the clash of blocs, but replaced by what?

Thomas Barnett has the answers. A senior military analyst with the U.S. Naval War College, he has given a constant stream of briefings over the past few years, and particularly since 9/11, to the highest of high-level civilian and military policymakers-and now he gives it to you. The Pentagon's New Map is a cutting-edge approach to globalization that combines security, economic, political, and cultural factors to do no less than predict and explain the nature of war and peace in the twenty-first century.

Building on the works of Friedman, Huntington, and Fukuyama, and then taking a leap beyond, Barnett crystallizes recent American military history and strategy, sets the parameters for where our forces will likely be headed in the future, outlines the unique role that America can and will play in establishing international stability-and provides much-needed hope at a crucial yet uncertain time in world history.

For anyone seeking to understand the Iraqs, Afghanistans, and Liberias of the present and future, the intimate new links between foreign policy and national security, and the operational realities of the world as it exists today, The Pentagon's New Map is a template, a Rosetta stone. Agree with it, disagree with it, argue with it-there is no book more essential for 2004 and beyond.