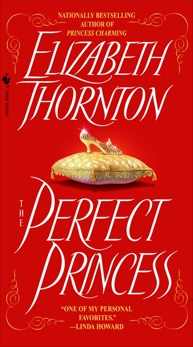 Elizabeth Thornton has created one of her most thrilling and sensuous novels ever — the story of a woman who’s nearly given up her hope of finding a noble hero...until fate throws her unexpectedly into a breathtaking plot to save a scoundrel.

Lady Rosamund Devere has no interest in becoming the wife of a dull prince, no matter how perfect the newspapers think she is for that role. But not even the unconventional Rosamund could imagine the headline the papers will soon be running: the one where she is the willing hostage of a condemned murderer.

Yet Richard Maitland is no ordinary criminal. Steely-eyed, arrogant, and dangerously attractive, the ex-chief of His Majesty’s Secret Service is also, as far as Rosamund is concerned, guilty as sin.

Caught up in his daring escape on the eve of his execution, Rosamund, who can handle a gun as well as any man and is not afraid to use it, soon finds herself in every bit as much danger as Richard. For the more she learns about this mysterious lone wolf of a man, the more determined she is to help him clear his name.

But even more perilous than the conspiracy surrounding Richard is the passion that ignites between them — a passion that is rash, reckless, and impossible to resist.