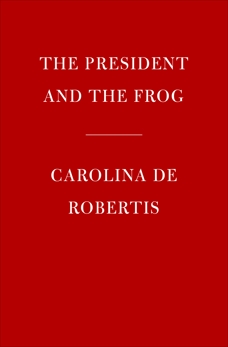 Synopsis: From the acclaimed author of Cantoras comes an incandescent novel--political, mystical, timely, and heartening--about the power of memory, and the pursuit of justice.

At his modest home on the edge of town, the former president of an unnamed Latin American country receives a journalist in his famed gardens to discuss his legacy and the dire circumstances that threaten democracy around the globe. Once known as the Poorest President in the World, his reputation is the stuff of myth: a former guerilla who was jailed for inciting revolution before becoming the face of justice, human rights, and selflessness for his nation. Now, as he talks to the journalist, he wonders if he should reveal the strange secret of his imprisonment: while held in brutal solitary confinement, he survived, in part, by discussing revolution, the quest for dignity, and what it means to love a country, with the only creature who ever spoke back--a loud-mouth frog.

As engrossing as it is innovative, vivid, moving, and full of wit and humor, The President and the Frog explores the resilience of the human spirit and what is possible when danger looms. Ferrying us between a grim jail cell and the president's lush gardens, the tale reaches beyond all borders and invites us to reimagine what it means to lead, to dare, and to dream.