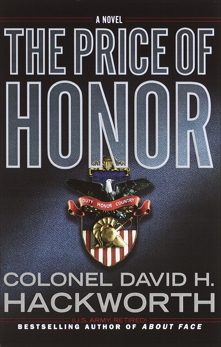 The Price of Honor

Synopsis: “[Hackworth is] honest, extremely intelligent, and perhaps the best military leader this country has had since Patton.”  —Philadelphian Inquirer

How many years?
How many battlefields?
How many men have
What it takes to pay
THE PRICE OF HONOR

With a golden name and a platinum future, U.S. Army Special Forces Captain Sandy Caine was born to be a soldier.  The latest in an eight-generation line of Caine men to serve duty, honor, country at West Point, Sandy’s character has been hammered out on an almost flawless anvil of military tradition.  But one bad apple did fall from the Caine family tree.  When he cracked under fire in Vietnam, Sandy’s father, Alex, dishonored the long gray line and sentenced his only child to a lifetime of brooding.  Now, pulling tours of duty in one global hot spot after another, it occurs to Sandy that he knows a dozen ways to kill a man for every way he knows of being one.
Little does he know that the truth of what happened to his father in Vietnam’s Central Highlands has transformed into a thirty-year legacy of deception perpetrated by Washington’s most powerful players.  And the only person with the skills to help Sandy untangle the Caine family secrets is Abigail Mancini, an ambitious civilian reporter with the Washington Chronicle, Sandy and Abbie know that combining Special Forces and the Fourth Estate is a recipe for disaster, but living dangerously is its own reward.  In times of war, the first casualty is the truth.  It’s not long before Sandy and Abbie learn that digging it up decades later can get you killed.