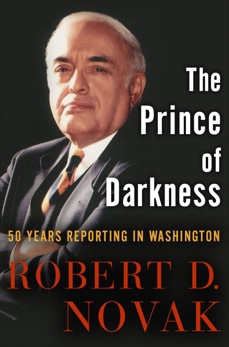 The Prince of Darkness: 50 Years Reporting in Washington

Synopsis: Long before Robert Novak became the center of a political firestorm in the Valerie Plame CIA leak scandal, he had established himself as one of the finest—and most controversial—political reporters in America. Now, in this sweeping, monumental memoir, Novak offers the first full account of his involvement in that affair, while also revealing the fascinating story of his remarkable life and career. This is a singular journey through a half century of stories, scandals, and personal encounters with Washington’s most powerful and colorful people.

Novak has been a Washington insider since the days when the place was a sleepy southern town and journalism was built on shoe leather and the ability to cultivate and keep sources (not to mention the ability to hold one’s liquor). He has covered every president since Truman, known (personally and professionally) virtually all the big movers and shakers in D.C., and broken a number of the biggest stories—the Plame story, we see here, being far from the most important. In this book, he puts it all into perspective. He also reveals the extraordinary transformations that have fundamentally remade Washington, politics, and journalism—and his own role in those transformations.

Moving beyond the “first draft of history” that is daily journalism, Novak can at last tell the stories behind the stories. He vividly recalls encounters with the Kennedys (angry meetings with Bobby, a scary ride home in Jack’s convertible), his unusual relationship with Lyndon Johnson (who hosted Novak’s wedding reception and who, “drunk as a loon,” had to be carried out of a bar by the young newsman), a decidedly odd off-the-record lunch with Ronald Reagan, and his first meetings with George W. Bush—at which the veteran journalist seriously underestimated the future president. We meet other fascinating characters as well, from Deng Xiaoping to Ted Turner to Ezra Pound.

Writing with bracing candor, Novak tells us how politics and journalism truly operate at the highest levels, both publicly and behind closed doors. He is equally open about his private experience. He writes frankly about the days when his drinking reflected too closely the boozy ways of the town. He acknowledges times when his job took precedence over his family. He is reflective about his political journey to the right. And he writes more personally than ever before about his spiritual journey, from his early life as a secular Jew to his conversion to Catholicism at the age of sixty-seven.

Packed with riveting, never-before-told stories, The Prince of Darkness is a hugely entertaining and equally perceptive view of fifty years in the life of Washington and the people who cover it.