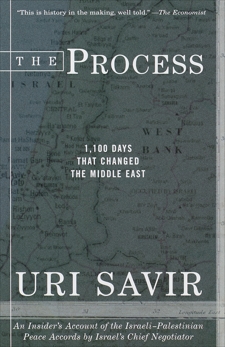 The Process: 1,100 Days that Changed the Middle East

Synopsis: "Meet your Enemy Number One," a nervous Norwegian diplomat said to Uri Savir, the young director-general of Israel's Foreign Ministry, as he introduced him to Abu Ala, one of Yasser Arafat's top aides. They were in Oslo, and this was the first official encounter between Israel and the PLO. The atmosphere was tense. Savir read from prepared notes: "The aim of Israel's elected government," he began, "is to bring about a historic reconciliation with the Palestinian people. We have no interest in only a cosmetic change of the status quo. It is not our wish to control your lives. . . ."
For more than half a century, both sides had denied the other's right to exist; both had sustained a terrible toll. Yet in the three years that followed that first encounter, after thousands of hours of subtle and complex secret negotiations, they hammered out the blueprint for a peaceful conclusion to a conflict that had seemed irre-
concilable. This book is the Israeli chief negotiator's extraordinary account of those negotiations, their implementation and aftermath, and of the un-
likely partnership that emerged between Yitz-
hak Rabin, Yasser Arafat, and Shimon Peres.
As the process initiated at Oslo began to re-
shape allegiances throughout the Middle East, Israeli and Palestinian extremists set out to violently destroy what they described as "the threat of peace." This is the inside story of the race between those committed to reconciliation and those who vowed to destroy the peace. It is also a poignant story of the developing relationship between Savir and Abu Ala, both from Jeru-
salem, both committed to their people, to their land, and to peace.
Will the peace process initiated at Oslo prevail against the assault of extremists and enemies of peace on both sides? The answer to this question, and the future of the peace process, is crucial not just to Israel and the Palestinians, but to the Middle East and the world.