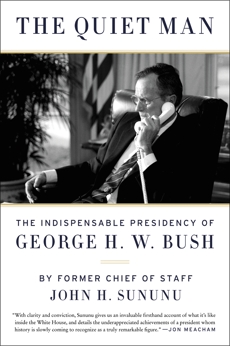 In this major reassessment of George Herbert Walker Bush, the 41st president of the United States, his former Chief of Staff offers a long overdue appreciation of the man and his universally underrated and misunderstood presidency.

“I’m a quiet man, but I hear the quiet people others don’t.”—George H. W. Bush

In this unique insider account, John H. Sununu pays tribute to his former boss—an intelligent, thoughtful, modest leader—and his overlooked accomplishments. Though George H. W. Bush is remembered for orchestrating one of the largest and most successful military campaigns in history—the Gulf War—Sununu argues that conventional wisdom misses many of Bush’s other great achievements.

During his presidency, the Berlin Wall fell and the Soviet Union collapsed. Bush’s calm and capable leadership during this dramatic time helped shape a world in which the United States emerged as the lone superpower. Sununu reminds us that President Bush’s domestic achievements were equally impressive, including strengthening civil rights, enacting environmental protections, and securing passage of the Americans with Disabilities Act and the 1990 agreement which generated budget surpluses and a decade of economic growth.

Sununu offers unparalleled insight into this statesman who has been his longtime close friend. He worked with Bush when he was vice president under Ronald Reagan, helped him through a contentious GOP primary season and election in 1988, and as his chief of staff, was an active participant and front-row observer to many of the significant events of Bush’s presidency. Reverential yet scrupulously honest, Sununu reveals policy differences and clashes among the diverse personalities in and out of the White House, giving credit—and candid criticism—where it’s due.

The Quiet Man goes behind the scenes of this unsung but highly consequential presidency, and illuminates the man at its center as never before.