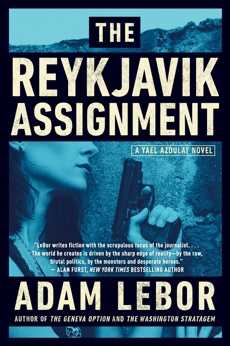 “[A] series of thought-provoking geopolitical thrillers…. LeBor succeeds in making us care about his two-fisted protagonist and her all-too-human vulnerability.”—Wall Street Journal

Yael Azoulay, covert negotiator for the UN Secretary General, has made a powerful enemy in Clarence Clairborne, head of Washington, D.C. lobbying and security firm the Prometheus Group. He’s fixated on revenge—and Yael knows it. She’s definitely being followed, but Clairborne’s operatives are not the only ones tracking her every move. Unexpected visitors from her past have arrived, determined to make her confront the secrets she’s been hiding.

Driven by exceptional plotting and electrifying prose, The Reykjavik Assignment follows Yael as she fights the pull of her old life while brokering the triumph of her career: A summit in Reykjavik, Iceland, between the United States and Iran. But when events in Reykjavik take a terrifying turn, the only thing that Yael cares about is preventing a desperate man from taking desperate measures to avenge his own past.