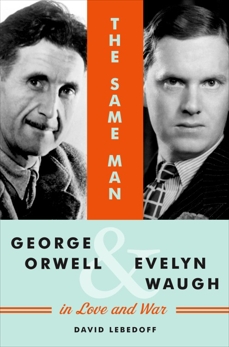 The Same Man: George Orwell and Evelyn Waugh in Love and War

Synopsis: One climbed to the very top of the social ladder, the other chose to live among tramps. One was a celebrity at twenty-three, the other virtually unknown until his dying days. One was right-wing and religious, the other a socialist and an atheist. Yet, as this ingenious and important new book reveals, at the heart of their lives and writing, Evelyn Waugh and George Orwell were essentially the same man.

Orwell is best known for Animal Farm and 1984, Waugh for Brideshead Revisited and comic novels like Scoop and Vile Bodies. However different they may seem, these two towering figures of twentieth-century literature are linked for the first time in this engaging and unconventional biography, which goes beyond the story of their amazing lives to reach the core of their beliefs–a shared vision that was startlingly prescient about our own troubled times.

Both Waugh and Orwell were born in 1903, into the same comfortable stratum of England’s class-obsessed society. But at first glance they seem to have lived opposite lives. Waugh married into the high aristocracy, writing hilarious novels that captured the amoral time between the wars. He converted to Catholicism after his wife’s infidelity and their divorce. Orwell married a moneyless student of Tolkien’s who followed him to Barcelona, where he fought in the Spanish Civil War. She saved his life there–twice–but her own fate was tragic.

Waugh and Orwell would meet only once, as the latter lay dying of tuberculosis, yet as The Same Man brilliantly shows, in their life and work both writers rebelled against a modern world run by a privileged, sometimes brutal, few. Orwell and Waugh were almost alone among their peers in seeing what the future–our time–would bring, and they dedicated their lives to warning us against what was coming: a world of material wealth but few values, an existence without tradition or community or common purpose, where lives are measured in dollars, not sense. They explained why, despite prosperity, so many people feel that our society is headed in the wrong direction. David Lebedoff believes that we need both Orwell and Waugh now more than ever.

Unique in its insights and filled with vivid scenes of these two fascinating men and their tumultuous times, The Same Man is an amazing story and an original work of literary biography.