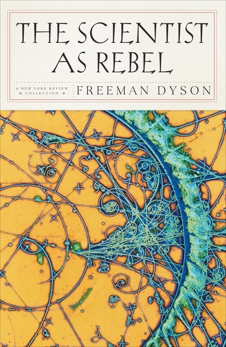 The Scientist as Rebel

Synopsis: From Galileo to today’s amateur astronomers, scientists have been rebels, writes Freeman Dyson. Like artists and poets, they are free spirits who resist the restrictions their cultures impose on them. In their pursuit of nature’s truths, they are guided as much by imagination as by reason, and their greatest theories have the uniqueness and beauty of great works of art.Dyson argues that the best way to understand science is by understanding those who practice it. He tells stories of scientists at work, ranging from Isaac Newton’s absorption in physics, alchemy, theology, and politics, to Ernest Rutherford’s discovery of the structure of the atom, to Albert Einstein’s stubborn hostility to the idea of black holes. His descriptions of brilliant physicists like Edward Teller and Richard Feynman are enlivened by his own reminiscences of them. He looks with a skeptical eye at fashionable scientific fads and fantasies, and speculates on the future of climate prediction, genetic engineering, the colonization of space, and the possibility that paranormal phenomena may exist yet not be scientifically verifiable. Dyson also looks beyond particular scientific questions to reflect on broader philosophical issues, such as the limits of reductionism, the morality of strategic bombing and nuclear weapons, the preservation of the environment, and the relationship between science and religion. These essays, by a distinguished physicist who is also a prolific writer, offer informed insights into the history of science and fresh perspectives on contentious current debates about science, ethics, and faith.