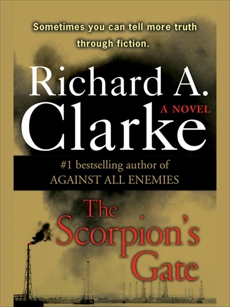 Synopsis: The insider whose warnings about terrorism on U.S. soil went unheeded—and whose book Against All Enemies rocketed to the top of bestseller lists—now presents his first novel: an all-too-believable story of politics, oil, espionage, and the earthshaking consequences that may lie at the end of the road ahead...

Brian Douglas, working for British intelligence, is in Bahrain’s five-star Diplomat Hotel when the bomb goes off. He’s as used to carnage as one can be, after his years in Iraq. But much has changed since that war. The sheiks have been driven out of Saudi Arabia—now called Islamyah—and Iraq has become a virtual puppet of Iran, now packing nuclear heat. The coalition forces are long gone from Saddam’s homeland, after pulling out their troops and leaving the mess behind.

But the mess isn’t going away, as this latest bombing suggests. And as Douglas and others try to sort out agendas and loyalties, motives and manipulations, the Middle East grows ever hotter—and this time withdrawal may not be an option...