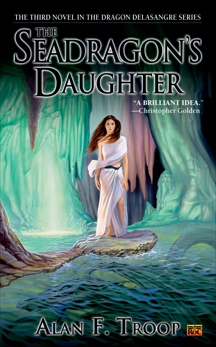 Synopsis: A secret race as old as time, they have inspired our greatest legends, our grimmest fairy tales, and our grandest nightmares. Changelings by day and slayers at dark, they call themselves People of the Blood. Mankind calls them Dragons. One has stepped forward to tell his story.

For three years, Peter DelaSangre and his beloved Chloe have lived in peace, nurturing their young family in relative happiness, until people begin to disappear from boats and islands off the coast of Miami. Rumors from the mainland force all eyes onto their private island retreat. But something more threatening than mere unwanted attention lurks in the watery depths surrounding the DelaSangres, waiting for the opportune moment to strike.

Suddenly, a young, mysterious female appears on Peter’s island. Her name is Lorrel. She is part of a sea-dwelling dragon race thought extinct for decades. And despite her seeming innocence, she will force him to confront his family’s cold, dark past, and his own vulnerability—threatening to separate him from his family forever.