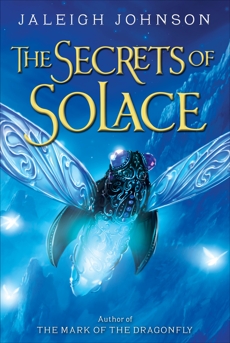 The Secrets of Solace

Synopsis: From Jaleigh Johnson, the acclaimed author of the New York Times bestseller The Mark of the Dragonfly, comes another thrilling adventure in the magical world of Solace.
Lina Winterbock lives in the mountain strongholds of Solace. She’s an apprentice to the archivists, the wise men and women whose lives are dedicated to cataloging, studying, and preserving the objects that mysteriously fall from the sky in the scrap towns.
Lina should be spending her days with books, but the Iron War has changed everything. The strongholds are now a refuge, and the people Lina once counted on no longer have time for her, so she spends her days exploring the hidden tunnels and passages of her home. The strongholds are vast and old, with twisting paths, forgotten rooms, and collapsed chambers, some of them containing objects that have been lost and forgotten even by the archivists.
And in one of the forgotten chambers, Lina discovers a secret.
Hidden deep in a cavern is a half-buried airship like nothing she has ever seen before. She’s determined to dig it out and restore it. But Lina needs help, and she doesn’t know anyone she can trust with her secret.
Then she meets Ozben, a mysterious boy who has a secret of his own—a secret that’s so dangerous it could change the course of the Iron War and the world of Solace forever.

Praise for The Secrets of Solace:

★ “Highly recommended for those who have finished with Harry and are too young for Katniss.”—SLJ, Starred review

"An engaging world rich in detail, mayhem, and adventure...All aboard for fantasy lovers with a dual penchant for girl power and keeping up with the Indiana Joneses."—Kirkus Reviews

"With imaginative details...readers will be rewarded by exciting action scenes and a deeper knowledge of Solace."-Booklist

"The book nicely balances the firm structure of the archivists' orderly lives with the wild abandon of the protagonist."-Bulletin

Praise for The Mark of the Dragonfly:

★ “This magnetic middle-grade debut . . . [is] a page-turner that defies easy categorization and ought to have broad appeal.”—Publishers Weekly, Starred

★ “Heart, brains, and courage find a home in a steampunk fantasy worthy of a nod from Baum.”—Kirkus Reviews, Starred

★ “A fantastic and original tale of adventure and magic. . . . Piper is a heroine to fall in love with: smart, brave, kind, and mechanically inclined to boot.”—School Library Journal, Starred

“A complex and impeccably developed plot—there is plenty to recommend in this novel.”—The Bulletin

“Appealing characters and lots of action make it a good choice for young adventure readers.”—Booklist