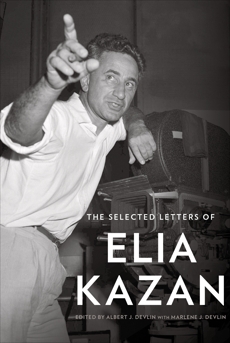 The Selected Letters of Elia Kazan

Synopsis: This collection of nearly three hundred letters gives us the life of Elia Kazan unfiltered, with all the passion, vitality, and raw honesty that made him such an important and formidable stage director (A Streetcar Named Desire, Death of a Salesman), film director (On the Waterfront, East of Eden), novelist, and memoirist.

Elia Kazan’s lifelong determination to be a “sincere, conscious, practicing artist” resounds in these letters—fully annotated throughout—in every phase of his career: his exciting apprenticeship with the new and astonishing Group Theatre, as stagehand, stage manager, and actor (Waiting for Lefty, Golden Boy) . . . his first tentative and then successful attempts at directing for the theater and movies (The Skin of Our Teeth, A Tree Grows in Brooklyn) . . . his cofounding in 1947 of the Actors Studio and his codirection of the nascent Repertory Theater of Lincoln Center . . . his innovative and celebrated work on Broadway (All My Sons, Cat on a Hot Tin Roof, J.B.) and in Hollywood (Gentleman’s Agreement, Splendor in the Grass, A Face in the Crowd, Baby Doll) . . . his birth as a writer.

Kazan directed virtually back-to-back the greatest American dramas of the era—by Arthur Miller and Tennessee Williams—and helped shape their future productions. Here we see how he collaborated with these and other writers: Clifford Odets, Thornton Wilder, John Steinbeck, and Budd Schulberg among them. The letters give us a unique grasp of his luminous insights on acting, directing, producing, as he writes to and about Marlon Brando, James Dean, Warren Beatty, Robert De Niro, Boris Aronson, and Sam Spiegel, among others. We see Kazan’s heated dealings with studio moguls Darryl Zanuck and Jack Warner, his principled resistance to film censorship, and the upheavals of his testimony before the House Committee on Un-American Activities.

These letters record as well the inner life of the artist and the man. We see his startling candor in writing to his first wife, his confidante and adviser, Molly Day Thacher—they did not mince words with each other. And we see a father’s letters to and about his children.

An extraordinary portrait of a complex, intense, monumentally talented man who engaged the political, moral, and artistic currents of the twentieth century.