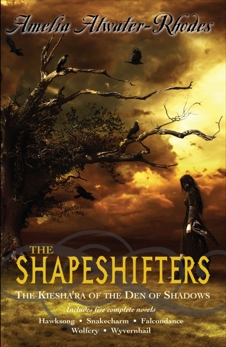 Hawksong
Danica Shardae, an avian shapeshifter, will do anything in her power to stop the war that has raged between her people and the serpiente—even pretend to be in love with Zane Cobriana, the terrifying leader of her kind’s greatest enemy, and accept him as her pair bond. But will Zane strike as swiftly and lethally as the cobra that is his second form?

Snakecharm
A surprising union has brought peace to the avians and serpiente. Soon a child will be born to carry on their royal lines. But Syfka, an ancient falcon, is claiming that one of her people is hidden in the avian and serpiente land. Is Syfka’s lost falcon just a ruse to stir up controversy among them?

Falcondance
Nicias is a falcon, the son of two exiles from Ahnmik, and images of this distant island have always haunted his dreams. When his visions become more like reality, his parents send him back to the homeland—and a royal falcon—they’ve tried their best to forget.

Wolfcry
Oliza Shardae Cobriana is heir to Wyvern’s Court, home of the avians and serpiente, whose war with each other ended just before Oliza was born. But hatred is slow to die, and Oliza’s serpiente suitor is found beaten in avian land. How can she be expected to lead a unified society if her people still cannot live peacefully together?

Wyvernhail
Hai, daughter of a falcon mother and a deceased cobra father, is considered a mongrel by most, an ally by some, and a friend by few. When Hai’s cousin abdicates the throne of Wyvern’s Court, Hai has visions of destruction. Now she will do anything to protect her new home—even if it means betraying the very people who need her most.