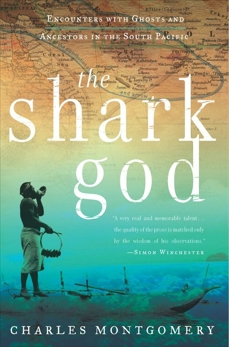 When Charles Montgomery was ten years old, he stumbled upon the memoirs of his great-grandfather, a seafaring missionary in the South Pacific. Poring over the faint text and faded pictures, he was entranced by the world of black magic and savagery the bishop described, and couldn't help but wonder what drove the Victorian to risk his life among people who had shot, drowned, or clubbed to death so many of his predecessors.

Twenty years later and a century after that journey, Montgomery sets out for the reefs and atolls of Melanesia in search of the very spirits and myths the missionaries had sought to destroy. He retraces his ancestor's path through the far-flung islands, exploring the bond between faith and magic, the eerie persistence of the spirit world, and the heavy footprints of Empire.

What he discovers is a world of sorcery and shark worship, where the lines between Christian and pagan rituals are as blurred as the frontiers of fact, fantasy, and faith. After confrontations with a bizarre cast of cult leaders, militants, and mystics, the author, in his quest for ancient magic, is led to an island in crisis -- and to a new myth with the power to destroy or to save its people forever.

Alternately terrifying, moving, and hilarious, with overtones of Melville and Conrad, The Shark God is Montgomery's extraordinary and piercingly intelligent account of both Melanesia's transformation and his own. This defiantly original blend of history and memoir, anthropology and travel writing, marks the debut of a singular new talent.