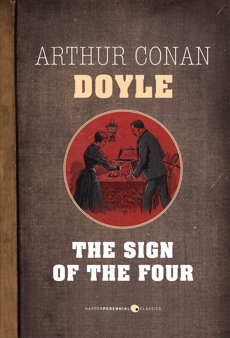 In Arthur Conan Doyle’s second Sherlock Holmes novel, client Mary Morstan poses two puzzles for the master detective—the 1878 disappearance of her father, Captain Arthur Morstan, and her mysterious receipt of six pearls (one per year) since answering a newspaper query in 1882. With time running out and the body-count mounting, Holmes and Watson must unravel a plot involving the East India Company, a rebellion, and stolen treasure.

The Sign of the Four has been adapted multiple times for film, in multiple languages, and served as the basis for an episode of the BBC television show Sherlock starring Martin Freeman and Benedict Cumberbatch.