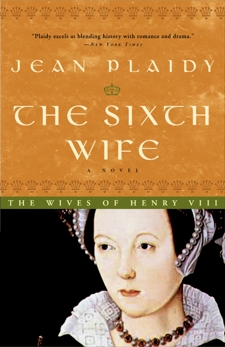 The Sixth Wife: The Story of Katherine Parr

Henry VIII’s fifth wife, Katherine Howard, was both foolish and unfaithful, and she paid for it with her life. Henry vowed that his sixth wife would be different, and she was. Katherine Parr was twice widowed and thirty-one years old. A thoughtful, well-read lady, she was known at court for her unblemished reputation and her kind heart. She had hoped to marry for love and had set her heart on Thomas Seymour, the dashing brother of Henry’s third queen. But the aging king—more in need of a nurse than a wife—was drawn to her, and Katherine could not refuse his proposal of marriage.

Queen Katherine was able to soothe the King’s notorious temper, and his three children grew fond of her, the only mother they had ever really known. Trapped in a loveless marriage to a volatile tyrant, books were Katherine’s consolation. But among her intellectual pursuits was an interest in Lutheranism—a religion that the king saw as a threat to his supremacy as head of the new Church of England. Courtiers envious of the Queen’s influence over Henry sought to destroy her by linking her with the “radical” religious reformers. Henry raged that Katherine had betrayed him, and had a warrant drawn up for her arrest and imprisonment. At court it was whispered that the king would soon execute yet another wife. Henry’s sixth wife would have to rely on her wits to survive where two other women had perished. . . .