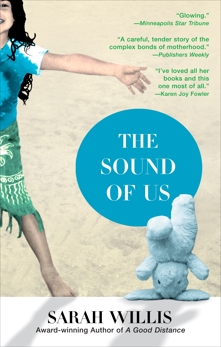 The Sound of Us

Synopsis: From the acclaimed author of A Good Distance and Some Things That Stay, a thoughtful and compelling novel about the voices that call out to us—and the ways our lives can be transformed when we learn to listen.

It was past two in the morning and Alice Marlowe was in bed alone when the phone rang. Lifting the receiver, she heard the voice of a child at the other end—a child who was clearly frightened, reluctant to reveal too much, and like Alice, all alone.

After a brief, halting conversation—and before she knows quite what she’s doing—Alice is at the little girl’s apartment. She has no idea where Larissa Benton’s mother has gone or when she’s coming back. She knows the right thing to do is to call the police. But when they arrive and carry a crying Larissa away, accompanied by a social worker, Alice finds it difficult to let her go.

She had no plans to bring a child into her life. She is single, in her late forties. She lives with a cat named Sampson and has imaginary conversations with her dead twin brother. As a sign-language interpreter for the deaf, she is used to standing between people, facilitating their conversations with each other. But perhaps it is this unusual skill that can help Larissa, who, as she travels through the labyrinth of Cleveland’s child-welfare system, refuses to speak. And perhaps that late-night call was somehow meant to bring them together—a lonely woman with no one to love, and a beautiful, scared six-year-old girl.