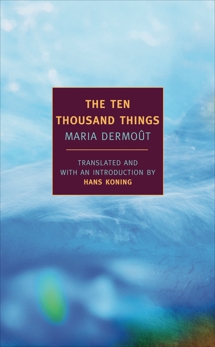 Synopsis: In Wild, Cheryl Strayed writes of The Ten Thousand Things: "Each of Dermoût’s sentences came at me like a soft knowing dagger, depicting a far-off land that felt to me like the blood of all the places I used to love.” And it's true, The Ten Thousand Things is at once novel of shimmering strangeness—and familiarity. It is the story of Felicia, who returns with her baby son from Holland to the Spice Islands of Indonesia, to the house and garden that were her birthplace, over which her powerful grandmother still presides. There Felicia finds herself wedded to an uncanny and dangerous world, full of mystery and violence, where objects tell tales, the dead come and go, and the past is as potent as the present. First published in Holland in 1955, Maria Dermoût's novel was immediately recognized as a magical work, like nothing else Dutch—or European—literature had seen before. The Ten Thousand Things is an entranced vision of a far-off place that is as convincingly real and intimate as it is exotic, a book that is at once a lament and an ecstatic ode to nature and life.