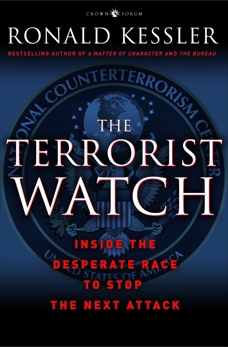 The Terrorist Watch: Inside the Desperate Race to Stop the Next Attack

Synopsis: “You make a mistake, there are dead people.” —FBI Special Agent Art Cummings, head of international counterterrorism operations Drawing on unprecedented access to FBI and CIA counterterrorism operatives, New York Times bestselling author Ronald Kessler presents the chilling story of terrorists’ relentless efforts to mount another devastating attack on the United States and of the heroic efforts being made to stop those plots. Kessler takes you inside the war rooms of this battle—from the newly created National Counterterrorism Center to FBI headquarters, from the CIA to the National Security Agency, from the Pentagon to the Oval Ofﬁce—to explain why we have gone so long since 9/11 without a successful attack and to reveal the many close calls we never hear about. The race to stop the terrorists, Kessler shows, is more desperate than ever.Based on exclusive interviews with FBI Director Robert Mueller, CIA Director Michael Hayden, White House Counterterrorism Chief Fran Townsend, and dozens of key intelligence operatives at all levels, The Terrorist Watch:• tells the previously unreported story of how the United States helped thwart the 2006 London terrorist plot, broke up terrorist cells in Canada, and prevented numerous other attacks • reveals how the CIA and FBI have rolled up more than 5,000 terrorists worldwide since 9/11 • provides a stunning insider’s account from the FBI agent who spent eight months debriefing Saddam Hussein after his capture• pinpoints press leaks that have resulted in CIA agents’ deaths, caused foreign countries to stop cooperating on key investigations, and even tipped off Osama bin Laden to U.S. surveillance• destroys numerous media myths, such as the canard that the FBI and CIA still don’t cooperate on investigations • discloses the truth about the number of U.S. mosques where imans preach jihad• shows how the intelligence community has radically changed its mission—and how the media have misled the public about those changes Never before has a journalist gained such access to the FBI, the CIA, the National Counterterrorism Center, and the other agencies that are doing the unheralded work of ﬁnding and capturing terrorists. Ronald Kessler’s you-are-there narrative tells the real story of the war on terror and will transform the way you view the greatest problem of our age.