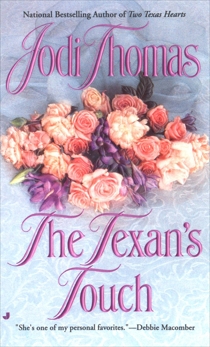 Synopsis: New York Times bestselling author Jodi Thomas gives readers a taste of the passion and adventure of the Old West with the first addicting romance in her series featuring the McLain brothers.

When Yankee doctor Adam McClain is kidnapped and forced to treat a wounded confederate soldier, he soon learns his patient’s name is not Nick, but Nichole. He is struck to his core by her bravery and beauty—and by the brief kiss they share that night. In the morning she saves his life in turn, protecting him from her rebel comrades, and sending him away from the Confederate camp, never to see her again—or so he believes.

Despite knowing that he can never be the same after their fateful encounter, Adam returns home after the war to his fiancée, the wealthy daughter of a snobby family of war profiteers, and tries to forget the girl in gray. But when, months later, Nichole reappears, asking for his help once more, Adam must make a choice. In a land still healing from the war that nearly tore it apart, will love prevail?