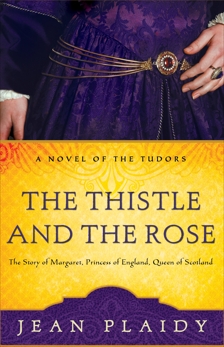 Synopsis: From the pen of the legendary historical novelist Jean Plaidy comes the story of Princess Margaret Tudor, whose life of tragedy, bloodshed, and scandal would rival even that of her younger brother, Henry VIII.

Princess Margaret Tudor is the greatest prize when her father, Henry VII, negotiates the Treaty of Perpetual Peace with neighboring Scotland. The betrothal is meant to end decades of bloody border wars, but it becomes a love match: To Margaret’s surprise, she finds joy in her marriage to the dashing James IV of Scotland, a man sixteen years her senior. But the marriage, and the peace it brings to both nations, does not last. When King James is struck down by the armies of Henry VIII, Margaret—Princess of England, but Queen of Scotland—finds herself torn between loyalty to the land and family of her birth and to that of her baby son, now King of the Scots. She decides to remain in Scotland and carve out her own destiny, surviving a scandalous second marriage and battling with both her son and her brother to the very end. Like all the Tudors, Margaret’s life would be one of turmoil and controversy, but through her descendants, England and Scotland would unite as one nation, under one rule, and find peace.