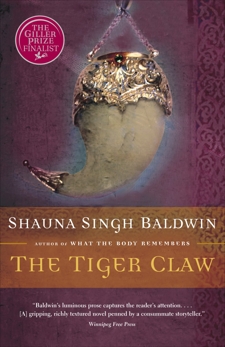 From the author of What the Body Remembers, an extraordinary story of love and espionage, cultural tension and displacement, inspired by the life of Noor Inayat Khan (code name “Madeleine”), who worked against the Occupation after the Nazi invasion of France.

When Noor Khan’s father, a teacher of mystical Sufism, dies, Noor is forced to bow, along with her mother, sister and brother, to her uncle’s religious literalism and ideas on feminine propriety. While at the Sorbonne, Noor falls in love with Armand, a Jewish musician. Though her uncle forbids her to see him, they continue meeting in secret.

When the Germans invade in 1940, Armand persuades Noor to leave him for her own safety. She flees with her family to England, but volunteers to serve in a special intelligence agency. She is trained as a radio operator for the group that, in Churchill’s words, will “set Europe ablaze” with acts of sabotage. She is then sent back to Occupied France. Unwavering courage is what Noor requires for her assignment and her deeply personal mission — to re-unite with Armand. As her talisman, she carries her grandmother’s gift, an heirloom tiger claw encased in gold.

The novel opens in December 1943. Noor has been imprisoned. She begins writing in secret, tracing the events that led to her capture. When Germany surrenders in 1945, her brother Kabir begins his search through the chaos of Europe’s Displaced Persons camps to find her.

In its portrayal of intolerance, The Tiger Claw eerily mirrors our own times, and progresses with moments of great beauty and white-knuckle tension towards a moving and astonishing denouement.