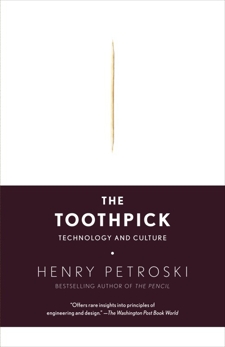 The Toothpick: Technology and Culture

Synopsis: A celebration culture and technology, as seen through the history of the humble yet ubiquitous toothpick, from the best-selling author of The Pencil.

From ancient Rome, where emperor Nero made his entrance into a banquet hall with a silver toothpick in his mouth, to nineteenth-century Boston, where Charles Forster, the father of the American wooden toothpick industry, ensured toothpicks appeared in every restaurant, the toothpick has been an omnipresent, yet often overlooked part of our daily lives. Here, with an engineer's eye for detail and a poet's flair for language, Henry Petroski takes us on an incredible tour of this most interesting invention. Along the way, he peers inside today's surprisingly secretive toothpick-manufacturing industry, and explores a treasure trove of the toothpick's unintended uses and perils, from sandwiches to martinis and beyond.