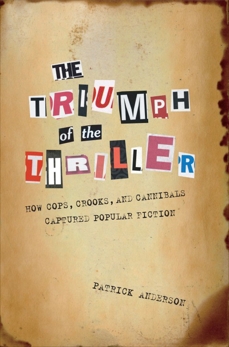 The Triumph of the Thriller: How Cops, Crooks, and Cannibals Captured Popular Fiction

Synopsis: There’s been a revolution in American popular fiction. The writers who dominated the bestseller lists a generation ago with blockbuster novels about movie stars and exotic foreign lands have been replaced by a new generation writing a new kind of bestseller, one that hooks readers with crime, suspense, and ever-increasing violence. Patrick Anderson, The Washington Post’s man on the thriller beat, calls this revolution “the triumph of the thriller,” and lists among its stars Thomas Harris, Michael Connelly, George Pelecanos, Dennis Lehane, Sue Grafton, and Elmore Leonard.

In his provocative, caustic, and often hilarious survey of today’s popular fiction, Anderson shows us who the best thriller writers are–and the worst. He shows how Michael Connelly was inspired by Raymond Chandler, how George Pelecanos toiled in obscurity while he mastered his craft, how Sue Grafton created the first great woman private eye, and how Thomas Harris transformed an insane cannibal into the charming man of the world who made FBI agent Clarice Starling his lover.

Anderson shows Scott Turow inventing the modern legal thriller and John Grisham translating it into a stunning series of bestsellers. He casts a cold eye on Tom Clancy’s militaristic techno-thrillers, and praises Alan Furst and Robert Littell as world-class spy novelists. He examines the pioneering role of Lawrence Sanders, the offbeat appeal of Dean Koontz, the unprecedented success of The Da Vinci Code, and the emergence of the literary thriller.

Most of all, Anderson demands that the best of these novelists be given their due–not as genre writers, but as some of the most talented men and women at work in American fiction. Don’t trust the literary elites to tell you what to read, he warns–make up you own minds. The Triumph of the Thriller will convince many readers that we’ve entered an important new era in popular fiction. This book can be your guide to it.