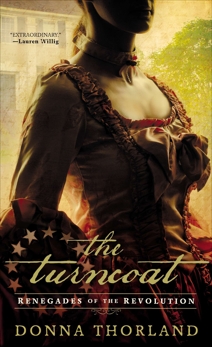 The Turncoat: Renegades of the American Revolution

Synopsis: They are lovers on opposite sides of a brutal war, with everything at stake and no possibility of retreat. They can trust no one—especially not each other.

Major Lord Peter Tremayne is the last man rebel bluestocking Kate Grey should fall in love with, but when the handsome British viscount commandeers her home, Kate throws caution to the wind and responds to his seduction. She is on the verge of surrender when a spy in her own household seizes the opportunity to steal the military dispatches Tremayne carries, ensuring his disgrace—and implicating Kate in high treason. Painfully awakened to the risks of war, Kate determines to put duty ahead of desire, and offers General Washington her services as an undercover agent in the City of Brotherly Love.

Months later, having narrowly escaped court martial and hanging, Tremayne returns to decadent, British-occupied Philadelphia with no stomach for his current assignment—to capture the woman he believes betrayed him. Nor does he relish the glittering entertainments being held for General Howe’s idle officers. Worse, the glamorous woman in the midst of this social whirl, the fiancée of his own dissolute cousin, is none other than Kate Grey herself. And so begins their dangerous dance, between passion and patriotism, between certain death and the promise of a brave new future together.