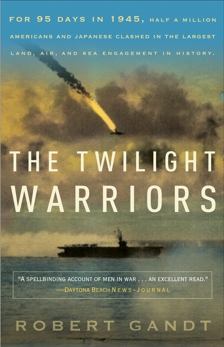 Synopsis: Winner of the 2011 Samuel Eliot Morison Award for Naval Literature, The Twilight Warriors is the engrossing, page-turning saga of a tightly knit band of naval aviators who are thrust into the final—and most brutal—battle of the Pacific war during World War II: Okinawa.

April 1945. The end of World War II finally appears to be nearing. The Third Reich is collapsing in Europe, and the Americans are overpowering the once-mighty Japanese Empire in the Pacific. For a group of young pilots trained in the twilight of the war, their greatest worry is that it will end before they have a chance to face the enemy.

They call themselves Tail End Charlies: They fly at the tail end of formations, stand at the tail end of chow lines, and now they are catching the tail end of the war. What they don’t know is that they will be key players in the bloodiest and most difficult of naval battles—not only of World War II but in all of American history.

The Twilight Warriors relives the drama of the world’s last great naval campaign. From the cockpit of a Corsair fighter we gaze down at the Japanese task force racing to destroy the American amphibious force at Okinawa. Through the eyes of the men on the destroyers assigned to picket ship duty, we experience the terror as wave after wave of kamikazes crash into their ships. Standing on the deck of the legendary superbattleship Yamato, we watch Japan’s last hope for victory die in a tableau of gunfire and explosions.

The fate of the Americans at Okinawa, including a twenty-two-year-old former art student, an intrepid fighter pilot whose life abruptly changes when his Corsair goes down off the enemy shore, and a young Texan lieutenant who volunteers for the most dangerous flying job in the fleet—intercepting kamikazes at night over the blackened Pacific—is intertwined with the lives of the “young gods”: the honor-bound kamikaes forces who swarm like killer bees toward the U.S. ships.

The ferocity of the Okinawa fighting stuns the world. Before it ends, the long battle will cost more American lives, ships, and aircraft than any naval engagement in U.S. history. More than simply the account of a historic battle, The Twilight Warriors brings to life the human side of an epic conflict. It is the story of young Americans at war in the air and on the sea—and of their enigmatic, fanatically courageous enemy.