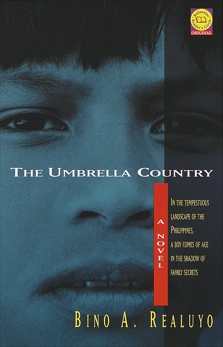 The Umbrella Country: A Novel

Synopsis: "Certain things are better kept than said. . . .
But certain things you have to find out now. . . ."

On the tumultuous streets of Manila, where the earth is as brown as a tamarind leaf and the pungent smells of vinegar and mashed peppers fill the air, where seasons shift between scorching sun and torrential rain, eleven-year-old Gringo strives to make sense of his family and a world that is growing increasingly harsher before his young eyes.

There is Gringo's older brother, Pipo, wise beyond his years, a flamboyant, defiant youth and the three-time winner of the sequined Miss Unibers contest; Daddy Groovie, whiling away his days with other hang-about men, out of work and wilting like a guava, clinging to the hope of someday joining his sister in Nuyork; Gringo's mother, Estrella, moving through their ramshackle home, holding her emotions tight as a fist, which she often clenches in anger after curfew covers the neighborhood in a burst of dark; and Ninang Rola, wise godmother of words, who confides in Gringo a shocking secret from the past--and sets the stage for the profound events to come, in which no one will remain untouched by the jagged pieces of a shattered dream.

As Gringo learns; shame is passed down through generations, but so is the life-changing power of blood ties and enduring love.