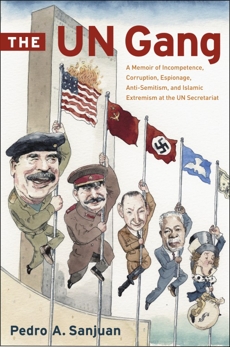 The UN Gang: A Memoir of Incompetence, Corruption, Espionage, Anti-Semitism and Islamic Extremism at the UN Secretariat

Synopsis: On the day Pedro Sanjuan moved into his new office at the UN Secretariat in 1984, he had the foresight to unscrew his telephone receiver. Out fell a little packet of high-grade cocaine. When he confronted the undersecretary to the chief Soviet diplomat—really a KGB colonel and the top Russian spy—the agent laughed good-naturedly and congratulated him on passing the test.
That was the beginning of Sanjuan’s long, peculiar odyssey into the looking-glass world of the United Nations Secretariat.
Pedro Sanjuan had been appointed by then–Vice President George H. W. Bush to a high-ranking UN post. His real mission: to keep an eye on Soviet espionage activities. Over the years, the Russians had managed to install nearly four hundred KGB and GRU agents in strategic positions throughout the Secretariat, and had turned it into a massive spy facility, operating openly and with absolute impunity on American soil.
But this, it turned out, was the least of the problem. Sanjuan soon discovered that incompetence, corruption, anti-Semitism, and outright criminality were rife throughout the UN Secretariat. Among the shady activities that he personally observed or documented were rigged bidding for major service contracts; drug transactions conducted in the UN’s parking garage; sale of shotguns and beryllium directly out of the UN building; ties to global organized crime figures; use of UN Information Centers and other agencies to disseminate anti-US and pro-PLO propaganda; systematic theft and abuse of UN facilities and budgets in East Africa; graft and corruption in Vienna; widespread sexual harrassment; use of the UN employee’s lounge to plan anti-Israel and anti-US activities by Muslim delegates; open celebration of 9/11 by said delegates in the halls of the UN; and inexplicable tolerance of all of the above on the part of the secretary general and the US government.
Sanjuan’s cast of characters includes every secretary general from Kurt Waldheim to Kofi Annan, and a large number of bureaucratic rogues and scoundrels. Much of what he documents in The UN Gang is absurdly comical. But its seriousness should not be overlooked.
Ultimately, Sanjuan argues, the weakness and corruption of the UN is our own responsibility. During the Cold War, the superpowers conspired to render it a useless forum for international pronouncements and posturing. Now, however, it has become the focal point of global resistance to American interests and policies. Will we continue to host an unholy convention of anti-Semitic, America-hating hypocrites? Or will we take steps to reform this once-proud institution and make it serve the ends of peace, justice, and international order? Only time will tell.