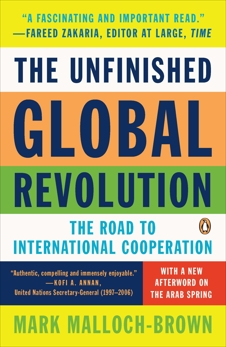 In The Unfinished Global Revolution, former United Nations deputy secretary general Mark Malloch- Brown diagnoses the central global predicament of the twenty-first century-as we have become more integrated, we have also become less governed. National governments are no longer equipped to address complex global issues, from climate change to poverty, and international organizations have not yet been empowered to step into the breach. In this book, Malloch- Brown wrenches the discussion away from terrorism, nationalism, and Iraq and calls for a new global politics-a bigger league, with greater opportunity for all.

Beneath a spotlight rarely reserved for public servants, Malloch-Brown has been at the center of recent world events: at the World Bank, when it was under siege from activists; and at the UN, where he fought off conservative critics who first attacked its role in development and then turned on Kofi Annan after the Iraq war. In The Unfinished Global Revolution, he draws on his experiences at the front lines of international development over the past several decades-from Cambodia to Darfur, and from Washington to UN headquarters-in order to provide a personal, on-the-ground view of seemingly abstract challenges.

The Unfinished Global Revolution chronicles how over the past few decades domestic problems- from unemployment to environmental distress- increasingly have international roots. As national politicians lose control to impersonal global forces, they will be forced to become more effective participants in international mechanisms, such as the United Nations, that may offer the only viable solutions. Increasingly, ad hoc arrangements among NGOs, civil society, and the private sector are filling in the gap created by the failures of individual governments.

In the wake of the worldwide economic crisis of 2008, many have been forced to acknowledge that a global economy needs global institutions to govern it. What is true for finance, Malloch- Brown argues, is surely true for public health, poverty, or climate change. In The Unfinished Global Revolution, he calls for us to embrace more powerful international institutions and the values needed to underpin a truly globalist agenda-the rule of law, human rights, and opportunity for all.