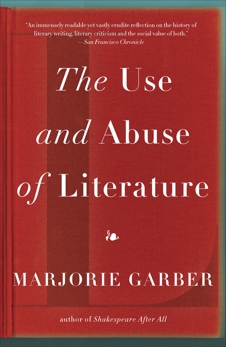 As defining as Christopher Lasch’s The Culture of Narcissism, Allan Bloom’s The Closing of the American Mind, and Dinesh D’Souza’s Illiberal Education were to the 1970s, 1980s, and 1990s, respectively, Marjorie Garber’s The Use and Abuse of Literature is to our times.

Even as the decline of the reading of literature, as argued by the National Endowment for the Arts, proceeds in our culture, Garber (“One of the most powerful women in the academic world”—The New York Times) gives us a deep and engaging meditation on the usefulness and uselessness of literature in the digital age. What is literature, anyway? How has it been understood over time, and what is its relevance for us today? Who are its gatekeepers? Is its canonicity fixed? Why has literature been on the defensive since Plato? Does it have any use at all, or does it merely serve as an aristocratic or bourgeois accoutrement attesting to worldly sophistication and refinement of spirit?  Is it, as most of us assume, good to read literature, much less study it—and what does either mean?

The Use and Abuse of Literature is a tour de force about our culture in crisis that is extraordinary for its brio, panache, and erudition (and appreciation of popular culture) lightly carried. Garber’s winning aim is to reclaim literature from the margins of our personal, educational, and professional lives and restore it to the center, as a fierce, radical way of thinking.