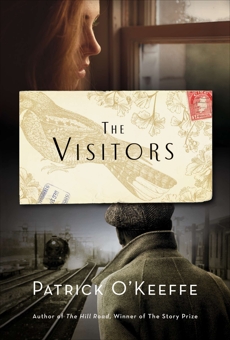 Synopsis: A lyrical novel set in America and Ireland from the Story Prize–winning author of The Hill Road

As he did so masterfully in the connected novellas of The Hill Road, Patrick O’Keeffe’s first novel moves back and forth in time and place to weave the story of two Irish families forever linked by love, secrets, and their heritage.

James Dwyer was born in rural county Limerick before moving to Dublin as a teenager and ultimately settling in Ann Arbor. One night James’s past appears in the form of a down-and-out man named Walter, who issues an invitation for James to come to Upstate New York to visit his old childhood neighbor, Kevin Lyons. Although neither James nor Kevin particularly cares for each other, there’s no denying their complicated past. Kevin and James’s sister, Tess, were lovers while James fell hard for Kevin’s sister, Una.

Illuminating the precarious balance of family intimacies and how stories can carry over from one generation to the next, O’Keeffe’s The Visitors further delivers on the elegant prose and plotting that earned him critical acclaim and the Story Prize for The Hill Road.