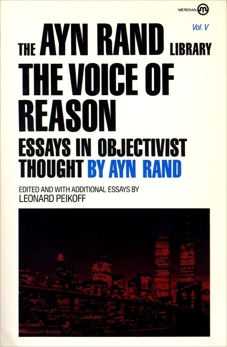 The Voice of Reason: Essays in Objectivist Thought

Synopsis: Between 1961, when she gave her first talk at the Ford Hall Forum in Boston, and 1981, when she gave the last talk of her life in New Orleans, Ayn Rand spoke and wrote about topics as varied as education, medicine, Vietnam, and the death of Marilyn Monroe. In The Voice of Reason, these pieces, written in the last decades of Rand's life, are gathered in book form for the first time. With them are five essays by Leonard Peikoff, Rand's longtime associate and literary executor. The work concludes with Peikoff's epilogue, "My Thirty Years With Ayn Rand: An Intellectual Memoir," which answers the question "What was Ayn Rand really like?" Important reading for all thinking individuals, Rand's later writings reflect a life lived on principle, a probing mind, and a passionate intensity. This collection communicates not only Rand's singular worldview, but also the penetrating cultural and political analysis to which it gives rise.